Cannabis isn’t like cilantro; people don’t generally eat it raw. That’s because hemp and cannabis in their natural states don’t offer the potent psychoactive or medicinal effects the plants are known for. Achieving these desirable effects requires a process called decarboxylation.

The decarboxylation process “activates” chemical compounds in cannabis so that the human body can use them. Specifically, raw hemp and cannabis contain THCA and CBDA. When heated, those molecules change to THC and CBD — cannabinoids that can interact with the body’s endocannabinoid system.

Decarboxylation, commonly called “decarbing,” can be accomplished through a number of different techniques, but they all involve controlling temperature for a period of time. These compounds are most commonly decarbed when they are smoked, vaped, or dabbed. These options provide the heat source at the time of consumption.

However, many people prefer to use edibles rather than inhale combusted plant material. If you’re making a concentrate, oil, or wax designed for ingestion, you need to decarboxylate the material in advance. This can be achieved by roasting the plant in a home oven or simmering the raw flower in cooking oil on the stove.

A lot goes into transforming raw plant material into a high-CBD oil. Cannabinoid decarboxylation is just one of these steps, but it’s vital to ensuring that the end-user gets an effective and consistent product. In this article, we’ll talk about the why, what, and how of decarboxylation.

There’s a reason so many people smoke or vape cannabinoid products. Doing so is a quick and easy way to decarb the compounds so your body can experience their full effects. Even though chemical analysis of the process is fairly new, people have been decarboxylating hemp and cannabis for hundreds of years.

However, there are many more ways to enjoy these compounds than smoking and vaping. Some people prefer to avoid the smell of burning cannabis, while others just enjoy cooking with it. You’ll notice, though, that people don’t just eat the raw plant as a salad. There’s a reason for that too.

It’s a misconception that eating raw hemp or cannabis is heavily intoxicating. There isn’t usually enough THC in the raw plant to do that. Now, if you were to leave some harvested plant material out in the sun for ten days, a small portion of the CBDA and THCA would be decarboxylated, but there are much faster ways to go about making that happen. Because the “A” form of these cannabinoids can naturally decarboxylate over time, there’s a chance that you might feel something when eating an older sample, but it won’t be nearly as potent as it would be if it had been decarbed.

On a molecular level, decarboxylation removes the carboxyl group from THCA or CBDA, which turns them into THC and CBD. Heat is the primary catalyst for this process. Smoking and vaping decarboxylate these molecules so the bloodstream can absorb them right away.

However, if you’d rather ingest your cannabis, you can’t just eat the ash that’s left over. You need to decarb the THC or CBD without causing them to burn up or dissipate, which requires a gentler heat source than an open flame.

Well, CBD and THC are two different cannabinoids. They interact with the endocannabinoid system in the human body through its chemical receptors. THCA and CBDA are acidic precursors to these cannabinoids, but their chemical structure is slightly different, preventing them from interacting with the human body.

To understand how this works, it helps to remember that these chemicals aren’t just symbols on a page. They are three-dimensional objects. A CBDA or THCA molecule can’t interact with the endocannabinoid system because it’s too big to bond with the body’s CB1 receptors. It needs some physical modifications, and that’s what decarboxylation does. We can see this in another way by looking at the composition of these chemicals.

CBDA and THCA (C22H30O4) both have 22 carbon atoms, 30 hydrogen atoms, and 4 oxygen atoms. When they become CBD or THC (C21H30O2) they lose two carbon atoms and one oxygen atom. In other words, they lose one molecule of carbon dioxide (CO2), and heat is what causes that chemical reaction to happen.

It would be fair to refer to THCA and CBDA as “carboxylated molecules,” in that they have a carboxyl group in their chemical structure. Once the carboxyl group is broken down by heat, the compound then becomes “decarboxylated,” and the endocannabinoid system can interact with it.

There are a few CBD oil providers who include CBDA in their products, but they also include CBD. CBDA needs to be decarboxylated in order for people can enjoy its full benefits.

So now you know you need to decarb your plant material if you want to absorb THC or CBD orally. Many premade concentrates also need to be decarbed if you want to ingest them. For example, wax isn’t just popular for dabbing. You can also decarb wax to use in recipes and create your own edibles. First, let’s talk about how to decarb weed or hemp.

Think about baking cookies. Even if you’ve mixed your dough perfectly, the cookies could still be a disaster if you don’t set the oven to the right temperature, or if you take them out at the wrong time. In a similar way, it’s quite easy to “burn off” all your THC or CBD and be left with burnt plant material that isn’t usable.

The simplest way to decarb weed or hemp is to use an oven. The decarboxylation temperature of THC and CBD is a range that begins at about 200 degrees, though it’s more effective to use a higher temperature. Learning how to decarb plant material may involve some trial and error, so start with a small portion. First, preheat your oven to 250 degrees. While it’s heating up, break up the plant material into thumbnail-sized pieces and lay them out in a single layer on a baking sheet lined with parchment paper.

Place the baking sheet in the oven and check back after 25 minutes. Some ovens run hot and others cool, so if the plant material isn’t golden brown and dry to the touch, leave them in for another five minutes. Don’t go over 40 minutes at this temperature, as this can cause the CBD or THC to degrade.

Now let’s talk about how to decarb wax. Wax is one of many popular concentrates used for dabbing or vaping. Many people also prefer to create edibles with wax, because it is highly concentrated. Wax and other concentrates are commonly made using solvent extraction methods. Some extraction methods involve enough heat to decarb the THC or CBD and some don’t, so try to find that out from the store you bought your wax from.

If you’re working with a concentrate that still needs to be decarboxylated, start by removing it from the packaging it came in (putting plastic in the oven isn’t a good idea). If you’re unsure whether your concentrate is already decarbed or partially decarbed, it’s best to start at a lower temperature to avoid overdoing it.

Put the concentrate on a silicone baking sheet or a sheet lined with parchment paper. Place it in a 200-degree oven for 20 minutes. Check on it frequently after 10 minutes. It should be bubbling as CO2 is released during the process. If you notice the bubbles subsiding before 20 minutes is up, take it out. It’s now ready to be incorporated into your edibles. 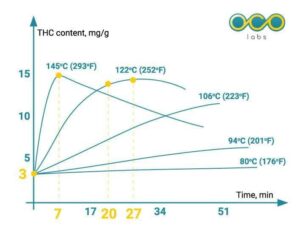 As you can see, for a plant with this level of THC, you can decarb the highest amount of THC at 293° for 7 minutes or 252° for 27 minutes. Not the drop off in both curves over time, and be aware that cannabinoids can degrade if heated for longer than those recommended times.

Remember, decarboxylation is just one step in the process of refining a hemp or cannabis product. When you’re starting from a raw plant, it’s important to have a strategy for extraction that optimizes your final product. Whether you choose to decarb before or after extraction (or not at all), each has its pros and cons.

If you decarb the material prior to extraction, you’ll end up losing the aromatic terpenes in the process. One way of getting around this is to extract the terpenes first, decarb the rest, and then add the terpenes back in.

If you don’t decarb before extraction, you’ll have a better chance of preserving the terpenes, depending on what kind of post-processing you do. You’ll also end up keeping the THCA intact, but that can be a good thing if you want to make a non-psychoactive product, or if you want to make solid extracts such as shatter. However, THCA requires double the extraction times of THC and won’t yield as much product per run.

Just like there are many options for decarboxylation, there are a lot of options for extraction. However, not all extraction machines offer the same level of reliability. With so many steps in the process of making a concentrate, it’s important that each piece can be counted on.

At OCO labs, our equipment is engineered to be efficient, affordable, and consistent, so your extraction runs can be perfect every time. If you’re looking for maximum control over every extraction, look no further than OCO Labs Modular Tabletop Extractors.

We update our blog regularly so stay tuned for the latest on pure CBD oil, pure CBD extract, pure cannabidiol oil, and much more!

Talk to an Extraction Specialist Today

This is a Non-Refundable Item